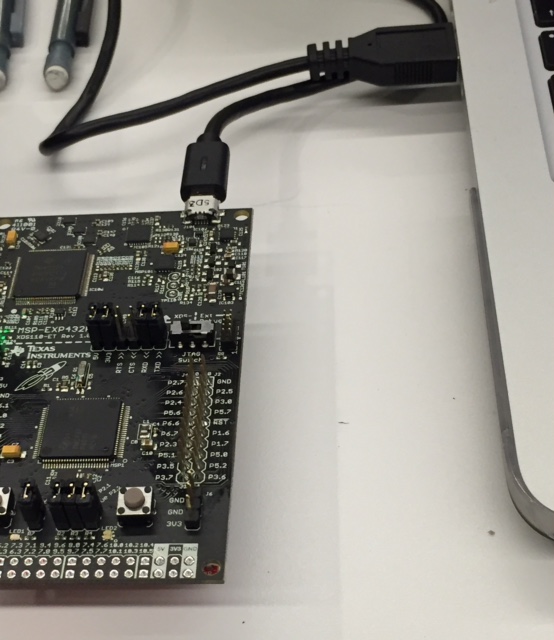 This week I am in Los Angeles, and happened upon a free workshop hosted by AT & T regarding IoT. I have been to one other workshop on IoT, as part of the Spectra Hackathon, and really enjoyed it. So, I was excited to learn more.

The first step, not surprisingly, involved tools and set up. Upon entry, we were given a Texas Instruments MSP432 P401R LaunchPad and a SimpleLink Wi-Fi Booster Pack. While I was not familiar with either, I wondered how this board compared to the SquareWear board I received at the Spectra Hackathon, and what exactly the Booster Pack was for. Most notably, my fear was gone: I was no longer scared of hardware and was instead wondering what I could do with it – even if I still had no idea how to do it.

We continued by installing and/or registering for a suite of tools: M2X (AT & T tool for storing IoT data in the cloud), Flow (AT & T tool for manipulating data & quick prototyping), Postman (easy way to make API calls), Energia (an IDE that connects TI devices), IFTTT (provides shortcuts -but we didn’t actually use this), Requestb.in (inspects http requests), and an older version of Java (uh, yeah).

The class itself was only three hours – which flew by. We connected and configured our boards, received data from the boards (initially, what time a button was pressed on the board, and then we changed it to show the duration of the press of the button) – which was plotted on a graph.  Lastly we set up a listener, to tell us when the button had been pressed too long (5 seconds).

The best part is that I think I just might know enough to get started on my own. Plus, they gave us a very helpful reference manual, and lots of links to practice projects that others have built with this board. I am slowly starting to feel like I can do this!