I was so excited when I saw that Datastax was offering a few free passes to the Cassandra Summit for Girl Develop It San Francisco members. Shortly after I received the announcement in an email, I sent a request for a ticket. I was thrilled when I received a ticket. Since April, when I found out that Cassandra was part of Intuit’s tech stack, I have wanted to “play” with Cassandra. I have wondered what kind of database was capable of holding that much data?

I realized once I received the ticket that I was going to have to spend some time learning how to use Cassandra. All of my experience at Hackbright was with PostgreSQL. While I have heard a few talks on NoSQL databases (Firebase, Dynamo, RethinkDB), I knew there was a lot more to learn.

Thankfully, DataStax offers free online classes for Cassandra. I first took DS101: Introduction to Apache Cassandra. Then, I completed DS201: DataStax Enterprise Foundations of Apache Cassandra. This past weekend, I started DS220: Data Modeling, which has both a class component and a set of exercises. Since I was preparing for the Box hackathon, I did not complete as much of the class as I had hoped. However, I knew enough about how Cassandra works because the first two classes (101 and 201) are quite thorough – and include quizzes.

I spent most of my time in sessions in the Beginner Development track. My favorite sessions were:

One other thing about the Cassandra Summit that was really neat: the attendees and the speakers were from all over the world: Spain, Australia, India, Russia, Vietnam, and so many other places. I loved hearing all of the accents and perspectives! 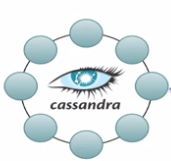